The Study’s goal was to investigate whether Title 24 energy code compliance requirements and energy simulation rulesets for RTU/economizer systems adequately reflected real world performance in California climate zones and make recommendations based on the investigation findings. The Study used research and field observations to inform these recommendations about updating the compliance requirements for RTU/economizer system (the HVAC prescriptive standard system baseline for many buildings) and energy simulation rulesets used by energy performance compliance software.

1. Current reference DX HVAC system performance curves seem appropriate, though some concerns remain about the representativeness of the low part-load efficiencies of the reference curves.

2. There was a high incidence of operational faults and programming errors due to poor installation practices in newly installed RTUs/economizers that resulted in significantly worse performance than expected. Of the 26 systems tested, the Study found only three systems correctly installed and programmed to provide the expected amount of economizer cooling. The Study’s key field observations were:

a. Of the units with installed economizers, only 77% of units had a functional damper that could modulate in response to outside and mixed air sensor readings if there was a sensor connected.

b. Only a slim majority of units (54%) met Title 24 minimum fresh air requirements, which raises the risk of occupant comfort, productivity, and health safety problems.

c. Of the 25 units with active controllers, the installation of mixed air sensors was correct on only half of the units.

d. Seventeen out of 26 units had economizer programing errors such as non-compliant setpoints or a fully closed minimum damper position setting

e. While economizer controllers met the system status and fault reporting capability requirements, they did not typically comply with the notification requirements. Installation and commissioning errors not addressed during installation of RTU/economizers continue to persist a year later, presumably for as long as the unit continues to function normally.

3. The RTU and economizers observed in the Study met the controller capability and the damper equipment requirements of the code. Nearly all the compliance issues were due to installation errors. The only errors linked to manufacturers are the installers’ failures to correctly reset outside air high-limit setpoints from the manufacturers’ default values, though it must be noted that specific economizer controller high-limit default setpoints are not a Title 24 requirement.

4. The Study suggests that, on average, operational faults and programming errors increased the expected RTU/economizer electrical cooling energy by 34% and 11%, across the population of recently installed, single-speed and two-speed RTU/economizers respectively, compared to the expected performance assumed by the CEC for new construction. The difference is much larger than this average in some climate zones and for some building types. The incorrect baseline assumptions make it appear that the energy savings of alternative HVAC technologies are lower relative to the RTU/economizer than is the case. This incorrect baseline disincentivizes the selection of improved technologies because their cost-effectiveness is underestimated. 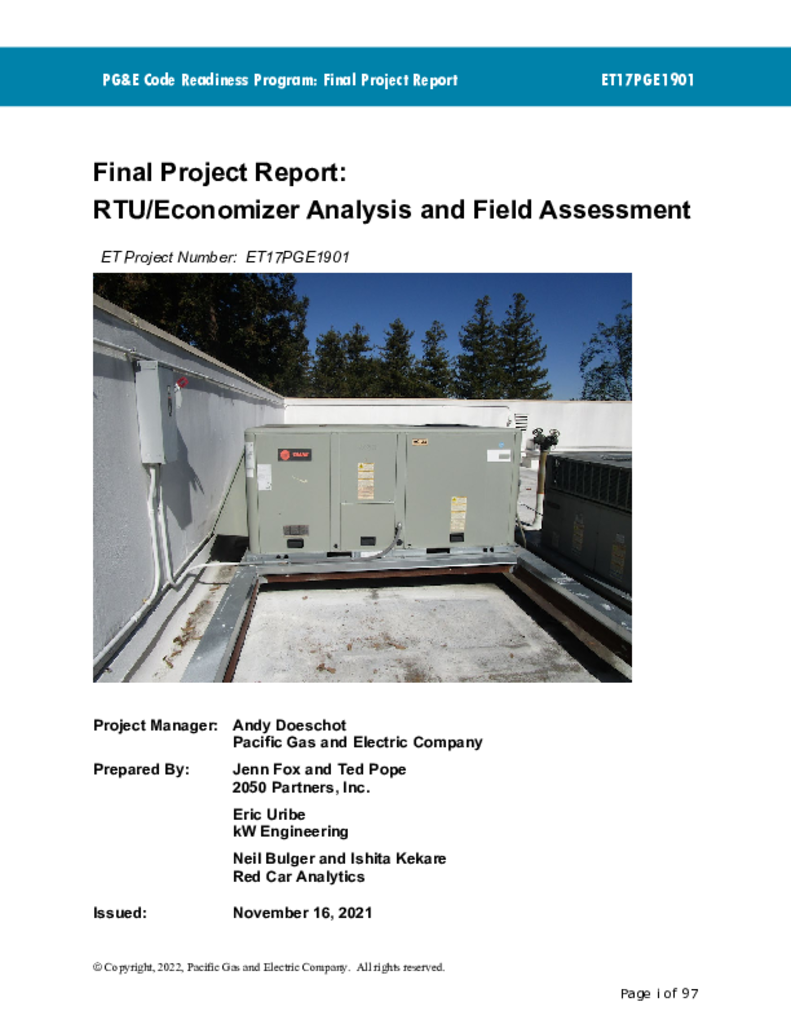