The Building Energy Efficiency Standards (Title 24) are based upon the cost-effectiveness of efficiency measures that can be incorporated into new buildings in California. Historically, the method to assign value to energy efficiency measure savings has been calculated on the basis of a “flat” source energy cost, which does not vary by season, or by day-of-the-week, or by time-of-day. Beginning with the 2005 Standards update, time dependent valuation (TDV) has been used in the cost-effectiveness calculation for Title 24. This allows the Title 24 Standards to provide more realistic signals to building designers, encouraging them to design buildings that perform better during periods of high energy cost. The concept behind TDV is that energy efficiency measure savings should be valued differently at different times to better reflect the actual costs to users, to the utility system, and to society. For example, the savings of an energy measure that is very efficient during hot summer weekday afternoons would be valued more highly than a measure that achieves efficiency during the off-peak. This kind of savings valuation reflects the realities of the energy market, where high system demand on summer afternoons drives electricity prices much higher than during, say, night time hours in mild weather. This project extends and modifies TDV to accommodate electric demand response (DR) measures. Examples of measures that can provide demand response are programmable controllable thermostats and addressable dimmable ballasts. Demand response focuses on reducing energy usage for a relative few hours per year, and the ability of an entity such as the electric utility or the California Independent System Operator (CAISO) to trigger the energy reduction with limited notice. With this update, the same TDV values can be used to evaluate the continuum of demand response and energy efficiency measures. This report on the 2008 TDV methodology has been developed to document the approach and specific formulae used to compute the benefits of demand response and energy efficiency in Title 24. This report focuses on the equations and methodology. In parallel, a report has been developed that documents the input data assumptions and provides web links to output files and the spreadsheets used to create the TDV values. 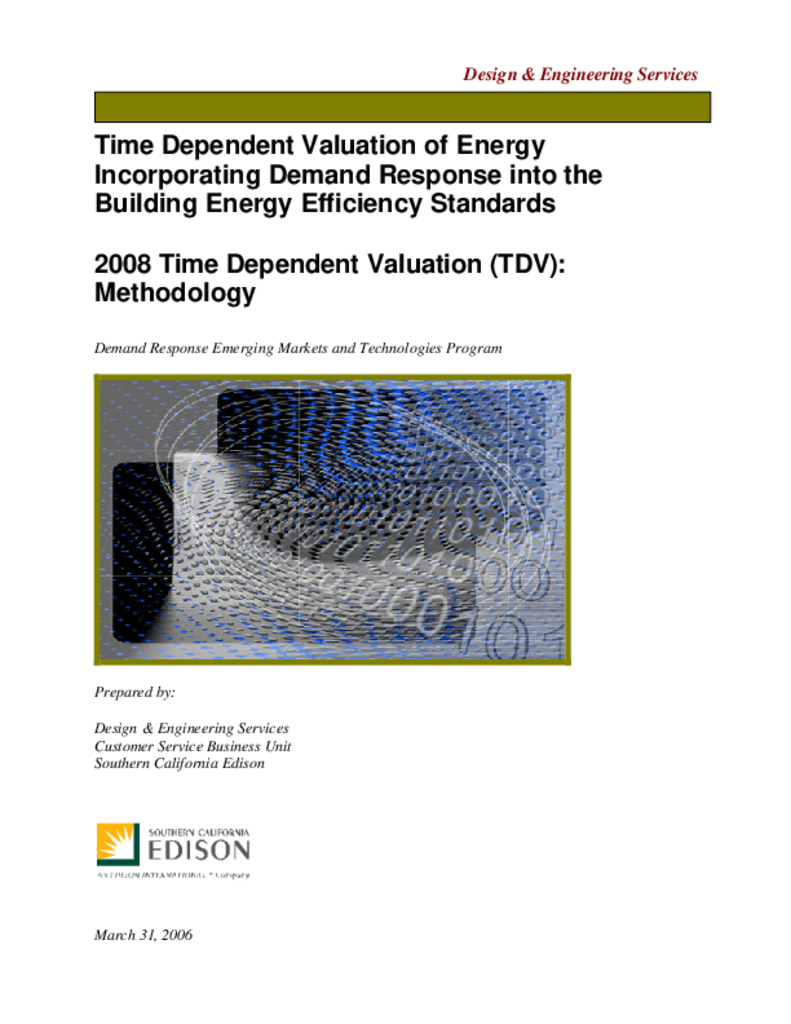